On 2-3 July around 600 delegates came to Manchester for Umbrella 2013, the flagship conference of the Chartered Institute of Library and Information Professionals (CILIP). An impressive variety of expert speakers, inspiring presentations and demonstrations of cross-sector engagement all featured, making this a superb event for connecting people in the library and information world. Adding to this ethos of progressive collaboration was U 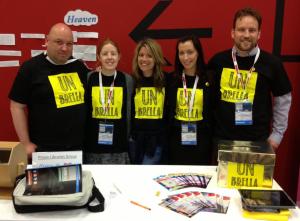 N-brella, a series of unique learning and networking opportunities in the guise of unconference style events. Holding an unconference within the usual conference format was the perfect opportunity to offer an exciting, experimental and stimulating sideways glance at the traditional library conference. I was privileged to join the          *The UN-brella Team L-R: Franko Kowalczuk, Annie  UNbrella team* who             Johnson, Carrie Wright, Helen Kielt, Oliver Key.     under the guidance of Franko Kowalczuk proposed  a lineup of social and unconference activities designed to complement the main conference programme and enable Umbrella 2013 to reach new spheres of professional engagement.

Unconferences have grown in stature most evidently with the nationwide explosion of Library Camps- events which are now regularly bringing the library community together at points all over the UK and Ireland. The unconference is built upon a formula where content and discussion is driven by participants, as opposed to a small number of pre-determined speakers. Have you ever attended a traditional conference session and felt after a short period of time that you were not getting out of it what you expected, however were too embarrassed/scared/polite to move elsewhere?

The unconference advocates the principles of Open Space Technology and the Law of Two Feet**. At an unconference you have the freedom to decide where you need to be and to take yourself there. By taking charge of the agenda you take ownership of your own learning and your participation becomes what enables the learning of others. Ultimately, if you show up, you’re vital to the whole thing. That’s really empowering. Little wonder unconferences such as Library Camps are now the go-to event for people interested in the library and information world.

What did UNbrella offer?

The purpose of UNbrella was to add something unique to Umbrella and to give traditional conference goers a flavour of the unconference experience. This was done via two main brackets: UNbrella (alternative events, debates and activities) and Cocktail UNbrella (the bit where people come together to socialise). The UN-brella stand was located among others from CILIP special interest groups and it was here that the Prison Libraries Group hosted ‘Heaven or Hell’ tombola- a fun and interactive way to share stories and experiences from prison librarians. A bingo theme continued with ‘Human Bingo’ running throughout the conference, a networking game which got delegates talking and asking some of the more unusual ice-breaker questions(!)

Mini Library Camp was a fundamental part of UNbrella which offered a taste of the larger Library Camp experience. We were thrilled to have present two experienced advocates of the library camp movement, Richard Veevers and Penny Andrews who led a Mini Library Camp on each afternoon of the conference. This was an opportunity for people to come together, learn about library camp and to set an alternative agenda to the main Umbrella, albeit for a couple of hours. Imagine the experienced, intelligent, passionate information professional who sits in the audience at a traditional library conference- put them in a library camp forum and suddenly you get to see their passion, hear their intelligence and learn from their experience. See the difference? I can still picture the wide eyes of one delegate who left a mini library camp session at UNbrella stating it was the ‘best part of the conference so far’.

The Umbrella programme contained a number of panel debates on topics such as ‘Where does the Internet end and the library begin?’ ‘Community managed libraries’ and ‘Leadership in the information profession’. UNbrella planned follow-on sessions for each debate, giving a chance to continue discussion with panel members and delegates in a more intimate and unstructured setting. Teasing out points, asking pertinent questions and voicing opinions were what these sessions were all about. In the spirit of unconferences this was an opportunity to generate debate and information sharing in a very open way.

Unconference events are naturally built upon social engagement and networking and in essence every aspect of UNbrella was an attempt to capture this. However there was a dedicated social strand to UNbrella which was very important. Pre-conference drinks on the eve of Umbrella gave a chance for people to meet and network, introducing first timers to the UNbrella agenda and why this was going to be a library conference with a difference. A lot of delegates travelled from all over the UK to Manchester for Umbrella and were invited to kick off the first day with an early morning breakfast along with the UNbrella team. Similarly UNbrella hosted the alternative conference dinner and quiz event, where delegates had the chance to let their competitive sides out (all of these social UNbrella activities contained a number of prizes).

What did UNbrella hope to achieve?

For two days UNbrella represented an alternative vision for the future of library conferences, showing that the unconference can offer something unique and valuable to the library community. Unconferences seem to go some way in quenching an admirable thirst in the library community for sharing, networking and learning. They offer a platform from which we can push the boundaries of how we learn and grow professionally. UNbrella hoped to go some way in promoting the benefits of Library Camp and unconferences to a professional community and show that the traditional conference can be adapted in creative ways to meet the needs of participants. It showed that as information professionals we don’t have to follow one formula or convention but instead can be creators of our own learning environments.

1) Whoever comes are the right people

2) Whatever happens is the only thing that could have

3) Whenever it starts is the right time

Law of Two Feet: if at any time you find yourself in any situation where you are neither learning nor contributing – use your two feet and move to some place more to your liking. Such a place might be another group, or even outside into the sunshine. No matter what, don’t sit there feeling miserable.