Archives. Captain Claire Mortimer joined the Defence Forces in 2003 and has served with the United Nations in Liberia and also with the OSCE (Organisation for Security Cooperation Europe) in Vienna.

Captain Mortimer has served in a number of roles in the Defence Forces including records manager in a unit.  After expressing an interest in working in archives in 2012 and following a period of employment in the Military Archives, Claire began a Masters in Archives and Records Management in UCD in September 2012 until July 2013.

On return from UCD, Claire assumed the position of second-in-command of Military Archives.

The Military Archives is the place of deposit for the records of the Defence Forces and the Dept of Defence. It is also responsible for records management within the Defence Forces. This is a role which Claire is largely involved in.

Second on the programme for New Professionals Day Ireland 2014 is Grace Toland from the Irish Traditional Music Archive (ITMA).

Grace Toland is Librarian at the Irish Traditional Music Archive (ITMA), a multimedia resource centre for Irish traditional song, music & dance.  Before joining ITMA in 2007, she worked in the libraries of Bord Iascaigh Mhara and the School of Celtic Studies, DIAS.

These roles have given her the opportunity to advise on, & implement a wide range of

Our first speaker in the afternoon is Bríd Dooley – Head of RTÉ Archives, RTÉ

Digital. An Audiovisual Archives Media professional with over 20 years experience in the broadcasting industry, she leads the moving image, audio, photographic & document archives of the National Public service broadcaster, RTÉ.

Her most recent appointment as head of the newly integrated RTÉ Archives department is focused on the development and opening up of RTÉ Archives by digital means (see www.rte.ie/archives) , a  core  part of the RTÉ Digital Division,  created in  2012.

She first joined RTÉ in 2000 as Television Archive Project leader, setting up a new

cataloguing division as part of the early digital archiving projects at RTÉ.  She was subsequently appointed as head of Television Archive & Library Services in 2003.  Prior to joining RTÉ, she worked extensively in UK Television Archives including ITN, Channel 4 News and GMTV as well as Broadcast Library & Archive consultancy services in Ireland.

She leads a number of partnership projects for RTÉ Archives, including a two year funded research program in linked-data and content discovery,  a program of the  newly launched national Research Centre, INSIGHT with the Digital Repository Ireland, DRI and the Digital Enterprise Research Institute, DERI.

international network of audiovisual archives.   She is an elected member of the governing council of the Federation of International Television Archives, and served as general secretary to the association from  2008-2012, managing the organisation as well as co-ordinating its annual world conferences.

Our day of workshops is nicely rounded off on the 1st of March with Barbara McCormack from NUI Maynooth. 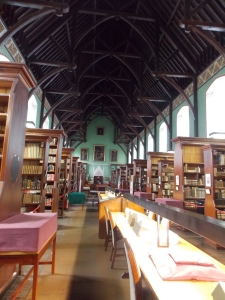 Barbara is a Special Collections Librarian with experience in a wide range of public and private institutions including The British Library, Trinity College Dublin, the Irish Taxation Institute and Fáilte Ireland.

Barbara has completed courses relating to ‘The Medieval Book’ and ‘Letterpress Printing’ at the London Rare Books School. Barbara has also presented at numerous conferences and library-related events, including the 2012 Rare Books Group Seminar at the Royal Irish Academy and the Fourth International Mobile Libraries Conference at the Open University.

Her current role involves the management of a special collections service across two service points at the Russell Library and the John Paul II Library, NUI Maynooth.

Once Barbara’s workshop session is completed, she has kindly offered to provide a guided tour of the Russell Library – an opportunity not to be missed!